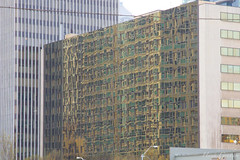 Reflections
Originally uploaded by dionwrbear
Posted a bunch of shots from walking around downtown. *Very* happy with this one, but some of the others are okay.

I've had the opportunity to compare different styles of being laid off this week, and it was an eye-opening experience.

In 2002, when there were lay-offs at my company, our CEO held a meeting as soon as he got back from the big corporate meeting, letting us know that there were going to have to be staff reductions. We were told, over the next few days, who had been cut. I was one of them.

It was not a happy time, but we were treated like adults.

This week, I got laid off again by the same company, and the experience shows how the company has changed.

At 2:05pm, I was told I needed to be in a meeting at 2:30. My boss was very uncommunicative about it, and couldn't bring himself to look at me directly. I wondered if it might be a lay-off. The new company CEO had gone out of town suddenly a few days before, and the head of our IT department had queried me about where the info was as to how to change the door-codes and locks.

The moment I saw that the meeting was myself, my boss, the CEO and our HR manager, I knew it was a lay-off.

They were distant and polite. I was told that while I was there with them, I was being locked out of my computer.

They were at pains to tell me that this was required of them, that everyone who was leaving had to be treated the same. I know there have been cases of people doing what they can to hurt the company they're leaving, but it did bother me. I would think, after more than 15 years of knowing me, that they'd know I wouldn't do any such thing, and the argument that they couldn't make any exceptions is one I've always hated.

Every time someone won't trust their judgment, but hides behind some rules like a good German, they give up some of their humanity. But I have to acknowledge it's probably a majority opinion these days that everyone should be treated the same, and I'm just the crank who disagrees.

They'd prepared a stack of boxes so that I could pack up my desk and leave. They didn't want me to mention what was going on, which struck me a bit silly--wouldn't it be pretty obvious when I went and packed my stuff?

We talked a little about health coverage, severance and the like, and they gave me a folder of stuff to set me on the path to a life away from them. 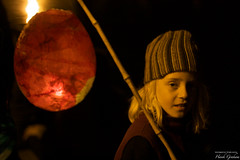 Fremont Luminata festival
Originally uploaded by dionwrbear
I got out to the Luminata Festival to photograph it Sunday night, and I am very happy. I got several shots that I unreservedly am happy with.

You can see the whole set at:

"Earworm" has become common parlance for any song that gets stuck in your head, but when I think of them, I think of ones that get in their when you're not expecting them, and even if they'd be the last one you'd consider twice. I'm thinking about this because right now, I've got a beaut running around in my head.

My Tivo has learned to know me enough that any highly rated film that shows up on Turner Classic Movies gets recorded. Thus it was that I got to watch "Rose Marie," with Nelson Eddy and Jeanette MacDonald.

Time has not been kind to this film, although it does have charm. But modern audiences are going to find it a bit silly to have folks suddenly singing like this (I can remember people laughing out loud at the "Indian Love Call" number back in '74 in "That's Entertainment"), and the less written about the sojurn in the Indian village, the better.

It's also an interesting relic in another way, as the role of the ne'er-do-well brother of Jeanette MacDonald is played by an impossibly young "James Stewart." It's a little like Richie Cunningham playing the part of the Fonz, although Stewart is good enough to pull it off. It's basically an old-fashioned (and it was old-fashioned when it came out, in 1935) operatta, where the opera singer from the Big City falls for the Mountie who's chasing down her brother.

The song that's caught in my head is the song that introduces the character Nelson Eddy plays in this movie, the Canadian Mountie. Some care was taken in the movie to make Nelson Eddy as macho as possible, which is one of the reasons the film looks so funny today, as Nelson Eddy is perhaps the gayest human male I've ever seen. He could tweak the gaydar of 90 year-olds from Kansas City who are convinced they've never seen a gay man. The only way he's convincing as a Mountie is that I'm certain he will always get his man.

And so the filmmakers went to some trouble to butch him up, starting with his very first entrance, riding at the head of a troop of Mounties. And when this hyperventilating, over-testosteroned Mountie troop enter, they're singing what's meant to be a lusty Mountie song--"Dead or Alive! We are out to get you--Dead or Alive!" If you put it in a theater today, there wouldn't be a dry seat in the house.

And THAT, of all things, is what's gotten caught somewhere in the back of my brain. I'll be walking over to Peets and whistling:

Could've been worse, of course. I coulda been Rick Roll'd. 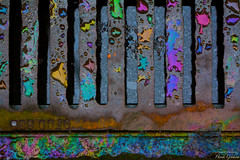 Colors after the rain
Originally uploaded by dionwrbear
I'm very proud of this shot. It was a bit of color in an otherwise depressingly drab day. 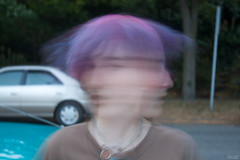 Girl With Purple Hair
Originally uploaded by dionwrbear
Saw a gal walking near my apartment with striking purple hair. I asked if I could take her picture, and it was this one, which suffered from the wrong setting still being in my camera from a previous shot, which I thought was interesting. Some times, you want a serendipitous accident. 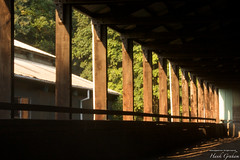 Evening light in the arena
Originally uploaded by dionwrbear
I'm pretty happy with how this shot caught the light. 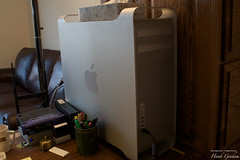 The new computer
Originally uploaded by dionwrbear
Suddenly, I am the most awesomely computered guy I know. This is the Mac Pro I got for my birthday. It is very impressive, and lots more than I need. And I'm keeping it. :)

I've also come up with a naming scheme for my various automata: the MacBook Pro is Ygor, the Mac Pro is Inga, and my new iPhone is Beaker. 'Tis a silly thing, but it makes me happy.

I have a stalker.

Every year, around about the 4th of July, I write a letter to the University of Houston Alumni Association, requesting that they leave me alone. So far, they have ignored this request for 27 years.

This year, I thought I would make fun of them publicly, so I am posting this yearly letter here online. Most of the letter is below the cut.